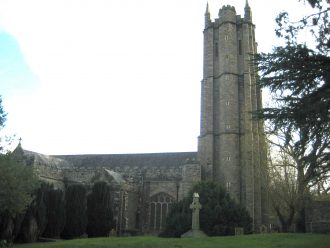 This online archive has been established as a means of providing open digital access to the Memorial Inscriptions (MIs) for St.Andrews Churchyard, Ashburton, Devon. The project to computerise the original paper records and to add new material such as digital photographs, started in 2013 and is on-going (as at November 2020). As further sections are digitised they will be added to this archive (website). We hope that this material will be of use for local historians and Family Historians around the world.

The original MI paper records were created through a survey undertaken by local people between 1973 and 1981 and have been held in the Ashburton Museum on behalf of the local community since that time. The paper records included hand-drawn section maps with associated grid references, sketches of the headstones plus inscription details for all the monuments that were found and decipherable at that time. These paper records were enhanced in approximately 1981 by producing typed alphabetically listed summaries for each churchyard section. These 1973-81 survey details are now at least 39 years out of date and in many cases the headstones have become even more unreadable or no longer visible, over those intervening years. Where necessary the online records have been updated and re-organised to reflect the actual conditions in the Churchyard at this time (2020).

The current project team was formed from a sub-group of the Ashburton U3A Family History group. We believed that the paper records of St.Andrews Memorial Inscriptions were an important part of local history and would undoubtedly be a great value to Family Historians around the world, especially if they could be made searchable online. The Ashburton Museum and St.Andrews church receive many enquiries each year about local history and local families. This archive plus the detailed local history information provided on the website ‘Old Ashburton’ can assist with local history researches.

Stop-Press (November 2020): As part of most recent work on the Old Section of the churchyard it has become apparent that some of the monuments found in the 1973-1981 survey are no longer in the same location or are missing, as yet to be re-discovered. However, we are now working in conjunction with the St.Andrews volunteer maintenance team to improve the knowledge and visibility of all the monuments. This joint activity will hopefully, over time, both improve our archive details and add to the records held online.

contributory website (59)
online catalogue (97)
Add an archive
Do you know a community archive that isn't in our list? Please add it.
Add an archive
Archives by subject