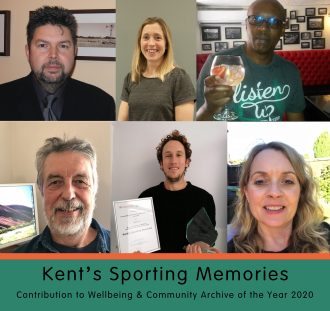 zoom
Kent's Sporting Memories. Contribution to Wellbeing, and Community Archive of the Year 2020 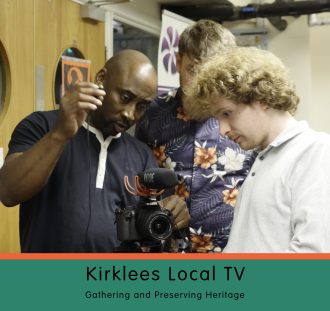 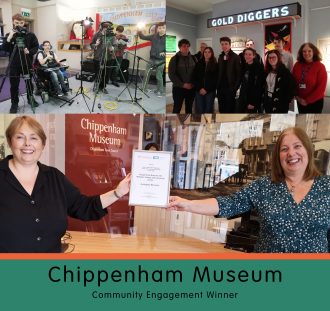 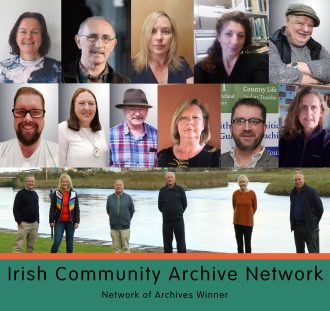 The winners of the 2020 Community Archives and Heritage Group (CAHG) awards were announced during the first in a series of CAHG webinars which took place on Monday 26th October. The webinar explored the topic of Heritage, Wellbeing and Belonging, with a collaborative presentation by the National Lottery Heritage Fund and the Restoration Trust.

The awards, which celebrate the importance of community archives and heritage, are organised, judged and presented by the Community Archives and Heritage Group, a special interest section of the Archives and Records Association (UK & Ireland), the main professional body representing archivists, records managers and archive conservators in Britain and Ireland.  2020 marks the ninth year of the awards.

Kent’s Sporting Memories was also awarded the overall Winner of the Best Community Archive and Heritage Group of 2020. All entrants are automatically considered for this award.

Commenting on the Kent’s Sporting Memories project, the judges said: “We were very impressed with the group’s use of the Oral History Interview process and how it had been used to give older, often vulnerable people, a sense of importance and purpose by giving people a chance to reflect upon their lives.  The group themselves shared how the release of memory can work as a therapeutic process. As a result, wellbeing felt truly embedded into the project rather than it being just another outcome.  The panel noted how everything felt very connected and the archive almost felt like the by-product of a wellbeing project rather than the other way around. The judges saw evidence of good training for volunteers at every point and the formation of useful partnerships to continue the legacy of the project.”

Two entries were also recognised this year as deserving of a special mention: People’s Heritage Co-operative and Leas Pavilion Archive.

The Community Engagement Award went to Chippenham Museum. Judges commented that this was a wonderful project which was very different in its material and audience. Across the board all the panel felt there had been truly authentic and interesting intergenerational work.  The entry had been particularly engaging when it mentioned creating a new audience of young people who have not been interested in the archival world before and indeed had not been in a museum prior to this project.  In this way, Chippenham Museum were helping create an audience for the future.

The Gathering and Preserving Heritage Award went to Kirklees Local TV. The judging panel were impressed by the archival work that was being done particularly as this was not a typical archive project and instead was more concerned with media.  The project was very topical in terms of the narratives that it explored.  The panel commented that this project may well be bringing in new audiences from different places rather than waiting for them to walk in a museum of similar site. The term “community elders with relevant expertise” was particularly noted and acknowledged by the panel who also felt this format of material was very relevant in this digital age.

The Networks of Archives Award went to the Irish Community Archive Network (ICAN). The panel noted how positive it was that ICAN were contributing to national policy.  It was also commented upon that there was a good mix of staff and volunteers contributing to the network.  The judges very much appreciated a good consideration of intangible culture and how that can be included in the members’ archives. There was some interesting conversation around the “ICAN family” which the judges really enjoyed reading. The panel noted how interested they be to hear how far the individual members feel their voice comes through in the network.

“We would like to congratulate this year’s award winners who have all demonstrated best practice and innovation in their different approaches to community archiving. The judging process for the overall winner was a lively debate as all were worthy winners!

We would also like to encourage community groups in the UK and Ireland that are CAHG members (i.e .community archives, community heritage groups, community museums and community archaeology groups) to consider entering next year’s awards. If you represent a group that is not already a member of CAHG why not sign up?  It’s free to join and makes you part of a much wider network. Perhaps you could be collecting an award in 2021!”