The award winners at the CAHG 2019 Conference.

The Community Archives and Heritage Group (CAHG) announced at its 13th annual conference in Glasgow the winners of its annual awards.  CAHG’s annual Awards are highly competitive and receive nominations from across Britain and Ireland.

The conference took place at the Royal Concert Hall in Glasgow and was co-hosted by the Scottish Council on Archives (SCA) and Glasgow Life. The theme of the conference was: ‘Moving Memories: Migration in Community Archives’. 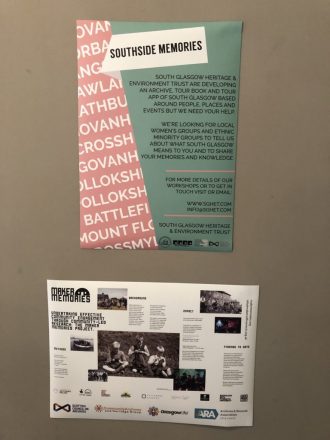 Participants were invited to submit posters to highlight their own community heritage projects.

The overall 2019 award winner, the Maker Memories project, also won the ‘Community Engagement’ category in this year’s awards. Maker Memories is a volunteer-led community project designed to capture the rich and diverse heritage of Maker Camp on the Rame peninsula (Cornwall) and is led by volunteers from Maker and Rame Community Interest Company, in partnership with (and supported by) The Box, Plymouth.

In reaching their decision, the judges commented:

We were impressed by the range of diverse communities that Maker Memories has engaged on this project to date, including and empowering a number of inter-related yet distinct groups, such as young people, the (now) elderly who had once visited the camp, people engaged with the music scene, environmental issues and cultural preservation. The project leveraged close links with the excellent local authority archive in nearby Plymouth, from whose expertise it has drawn to ensure high standards in archiving processes, techniques and skills. Maker Memories is already a very important archive for counter-culture, given the emergence of Maker Camp in recent years as an important music festival. Such communities everywhere need to be documented and made part of history, and Maker Memories is leading the way.

The heart of the project is collecting stories and social history about the camp, which has existed in various forms over the past 200 years. It draws on oral history interviews as a means of capturing living memory around Maker Camp, originally set up in the 1920s for ‘deprived city children’ and continued through to the early 1980s. More recent oral testimony has centred on the hundreds of musicians that have played at the venue and thousands of festival-goers following the creation of an annual music event there in 1999. Maker Camp has become a significant venue in the annual calendar of music festivals.

Colourful Heritage at the CAHG 2019 Conference.

There were two close overall runners-up this year that take the honours in the other subaward categories. Winner of the ‘Gathering Heritage’ category for 2019 is Colourful Heritage (Glasgow). The judges commented:

We loved the story around Colourful Heritage, from humble beginnings in 2010, as an informal conversation among friends over a cup of tea. The project itself fills a significant archival gap in the history of South Asian and Muslim migrants to Scotland. It set out to preserve/record the stories of sacrifice, ambition, identity, community and integration of the community’s early migrants to Scotland in the 1950s and 1960s. The project had an urgent driver – many of its first-hand oral accounts were made by first-generation migrants, now elderly. The testimonies are now available online, part of the UK’s largest online oral archive of South Asians/Muslims, alongside a growing archive of 100-plus videos, providing firsthand accounts of the personal journeys and emotions of the earliest generation. The archival material discusses identity, family life, religion, entrepreneurship, politics and integration into the wider Scottish society. This project was timely, empowering and done to a very high standard, and it has given both a visibility to this important community as well as inspiration to others.

Winner of this year’s new category, ‘Most Impactful Involvement in a Heritage Project by Young People’ is Moycullen Heritage (Galway). The judges commented:

Moycullen Heritage’s stand-out achievement was publishing the book “Ruaidhrí’s Story – how Moycullen got its name”, to foster an awareness and appreciation among local schoolchildren of Moycullen-born and internationally-renowned historian Roderic O’Flaherty (or Ruaidhrí Uí Fhlaitheartaigh). 2018 marked the tercentenary of O’Flaherty’s death. The tri-lingual book (in Irish/English/Polish) involving four local primary schools and members of the local Polish community, also served the purpose of encouraging social inclusion. We were deeply impressed at such innovative and deliberate efforts to engage with wider communities and, particularly, in the way Moycullen Heritage engaged young people and schools and the model it has created that others may use.

Nominate your group for an award in 2020

2019 is the eighth year of these awards, which were presented at the CAHG annual
conference at the Royal Concert Hall in Glasgow on 10 July 2019.

Nominations for the 2020 CAHG awards will open later in the year and are open to
community groups in the UK and Ireland that are CAHG members (i.e. community archives, community heritage groups, community museums and community archaeology groups). If your group is not already a member of CAHG why not sign up now? It is free to join and makes you part of a far wider network. Perhaps you could be collecting an award in 2020?