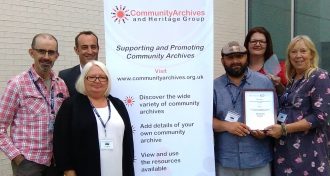 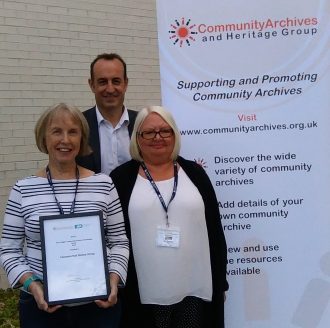 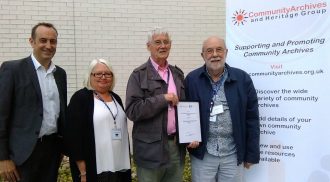 Plymouth based 100 Homes Oral History Project have been announced as the Best Community Archive and Heritage Group of 2018.

Winners of the Community Archives and Heritage Group (CAHG) awards were announced at the group’s annual conference in Birmingham.

The 100 Homes Oral History Project also won the Community Engagement Award.  The project began with Stonehouse Timebank and Stonehouse Action with the aim of talking about and recording the memories of people who live, or had lived, in the Stonehouse area.  Initially the project commemorated the merger of the distinct areas of Plymouth, Stonehouse and Devonport into the City of Plymouth in 1914.  Between Stonehouse and the rest of the city is Union Street – an area that is: “full of closed up and boarded up shops and a bad reputation for crime and prostitution in a place that was once full of nightlife and work coming from the Docks.”

From gathering oral history the project now: ‘involves a broader audience. Allowing for hundreds of people to take part in the project and come to workshops, shows, and talks for all ages and backgrounds and give interviews on life in Stonehouse”

The judging panel said “They have a fully rounded project with a real understanding of their target audiences. They engage with various groups of different ages, cultures and ethnicity across their community.”

The group met the criteria for the Community Engagement award stimulating and interesting the community and involving a wide range of people and widening general interest in the area and the process of gathering information.

When presenting the award for overall winner the judging panel said “100 Homes stood out for the sheer range of activities; the range of people they have involved and the appreciation that some want to give stories and others listen.  This group, and in fact all this year’s winners, are showcase projects that others can follow”.

The judging panel said “They stood out for their approach to their project and the variety of projects they have going on.  There is ongoing work on cataloguing but also walks, exhibitions, books, archaeology projects, pop up museums, teaching and learning projects and training.  This category is for ‘collecting heritage and preserving or stewarding heritage’ all of which they are working on”

With aid of HLF money the group have changed their website from a basic WordPress site which did not meet accessibility requirements. They wanted their website to function across different user platforms, tablets and smartphone. After a year of planning, the new website went live in November 2017. The site highlights the work of the project in a more attractive way, meets accessibility requirements, increases storage capacity and enables the group to analyse site traffic more rigorously

The judging panel said “Lots of thought and planning have gone in to this.  They meet the criteria asked for: ‘successful digital presence, novel or original digital techniques, examples for other community archives to follow and gave consideration of planning and long term sustainability’.  This is a good project that is working with schools, has blogs on the site and a twitter feed to engage young people”.

Enter your own archive in 2019

The awards are sponsored by Dr Nick Barrett and Sticks Research and will run again in 2019. The awards celebrate the importance of community archives and heritage and past winners, not just overall but of categories too, say that winning encouraged the group to carry on and generated new ideas and new members.

Nominations will open later in the year and are open to community groups in the UK and Ireland who are CAHG members (i.e. community archives, community heritage groups, community museums and community archaeology groups). If your group is not already a member of CAHG it is free to join.