You are here: HomenextNewsnext2008nextIslam Awareness Campaign 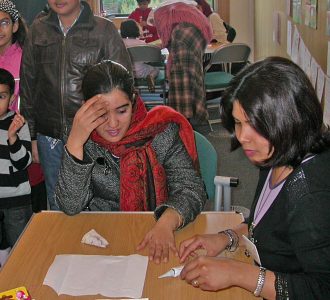 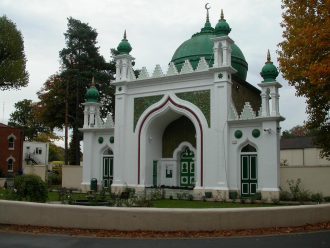 Surrey History Centre, like many heritage organisations, has a broader more inclusive definition of cultural diversity, moving away from racial and ethnic differences and instead celebrating a shared history. Our involvement with Islam Awareness Week (IAW), since 2005, is one way in which we can achieve this aim. The campaign is run by the Islamic Society of Britain to help communities come together in a climate of understanding and appreciation, and promote the sharing of information between cultures to remove misunderstandings. Organised by Sofia and Mubashir Khan of the Woking branch of the Islamic Society of Britain, Surrey History Centre is delighted to have been involved in these truly inclusive events to help celebrate the history of Islam.

Woking has a long-established Islamic connection: the Shah Jahan Mosque (Grade II listed) was the first purpose-built mosque in the country. Built in 1889 by Dr Gottleib Leitner (1860-1899), it was partly funded by the Begum Shah Jahan, the female ruler of the Indian princely state of Bhopal. The Mosque attracted royal visitors and many famous British converts including Lord Headley, who founded the British Muslim Society, and Marmaduke Pickthall who provided one of the most eloquent English translations of the Quran. Woking’s Muslim Burial Ground was built during the First World War as the only designated place of burial for Muslim soldiers who died at the Indian Army Hospital in Brighton Pavilion.

As a result of Surrey History Centre’s outreach and diversity work with the Mosque over the last 2 years, several important deposits relating to the Muslim community in Woking have been placed with us for permanent posterity, including papers deposited by Mohammed Ilyas Raja, a trustee of the Mosque and former Woking Borough councillor (Ref.Z454), and works published by The Woking Muslim Mission and Literary Trust spanning over 70 years, including the Islamic Review (Ref.7831).

As the official custodians of Surrey’s history we feel it is important to preserve and build on these connections. We want our archive collections to develop in a way that reflects Surrey’s diversity and hopefully this event will encourage the public to explore wider aspects of the county’s heritage.

Surrey History Centre has another surprising link with Islam: Hugh Edgar, the architect who designed the Centre, was previously commissioned by King Hussein of Jordan to work on the Mausoleum Mosque and Holy Relic Building, purpose-built to house an original 7th Century letter written by the prophet Mohammed to the Emperor of Byzantium.

The first IAW in 2005 saw around 100 visitors of all ages enjoy continuous presentations on the history and influence of Islamic art and culture in Britain, along with a display of notable historic scholars and scientists from the Islamic world. There were silk painting workshops in the morning and afternoon where some beautiful designs were created and also henna painting (extremely popular!). Children were kept occupied with craft activities of all varieties and plenty of drawing, cutting out and glue! A talk by Mohammed Siddique Seddon from the Centre for Islamic Studies, Leicester, focusing on 1000 Years of Islamic culture in Britain was the highlight of the day, which ended with story time for young children – a noisy but engrossing session! The event was a huge success and there was positive feedback from many participants.

Building on this in 2006, nearly 80 visitors, many of them new to the Centre, once again came to celebrate the history and culture of Islam in Surrey. On display was an exhibition (kindly loaned by The Lightbox, Woking’s Museum and Arts Centre) featuring the Woking Muslim Burial Ground, accompanied by artist Said Adrus’ beautiful and haunting film ‘Pavilion with a View’ which used both contemporary and archive images to explore ideas of memorial and identity. A second display ‘Remembering Forgotten Heroes’ (on loan from English Heritage) honoured the lives of Indian servicemen who fought during the First and Second World Wars. Visitors relaxed with refreshments and watched ‘A thousand years of Islam in Britain’, tracing the history and influence of Islamic art and science featuring Adam Hart-Davies and Muslim journalist Ragi Omar. Children’s activities ensured that the littlest visitors were kept happy again with henna painting and craft activities, and in the afternoon the gentle beating of a drum announced storytime, whereupon a great hush fell in the children’s activity area!

Distinguished academic Humayun Ansari, OBE, Professor of the History of Islam and Cultural Diversity and Director of the Centre for Ethnic Minority Studies at Royal Holloway (University of London), presented a most thought-provoking lecture on his latest work ‘Islam in Britain: weaving the strands of the past and the present’, which not only focused on the contemporary image of Islam but also historical perceptions of the religion. Details of the event had previously been read at Friday prayers at the Shah Jahan Mosque and Imam, Mufti Liaquat Ali Amod also visited. Positive feedback on the day came from many participants; local personality Raj Chhetri, a Gurkha and Hindu, and organiser of the annual Woking One World Party, commented “This event is so important in the context of the Middle East today”.

2007’s event again saw visitors of all ages attend the event, including Mayor of Woking, Cllr Brian Cross. Lively children’s activities were once again enjoyed and refreshments were on offer as well as a free exhibition ‘From Kabul to Kandahar, 1833-1933’, the travelling version of the major highly successful exhibition held at the Royal Geographical Society in London earlier this year. The fascinating exhibition featured largely unseen breathtaking images provides a revealing insight into the communities, customs and histories of the mountainous region of Pakistan and Afghanistan. Sara Wajid, co-researcher of the exhibition and renowned journalist and cultural writer gave a thought-provoking talk about her research for the exhibition and the modern parallels between British visitors to the region in the Nineteenth Century and the present day. Ms Wajid also focused on the importance of memorial in the Muslim world using the Muslim Burial Ground at Horsell as a local case study. With Woking’s established connection with the Muslim community we were also delighted to have depositor Mr Mohammad Ilyas Raja, trustee of the Shah Jahan Mosque in the audience. Another enjoyable day was had by all and Surrey History Centre was pleased to be involved in this their 3rd annual event for the Campaign.