You are here: HomenextNewsnext2009nextSaving the script: The Bob Watson Archive 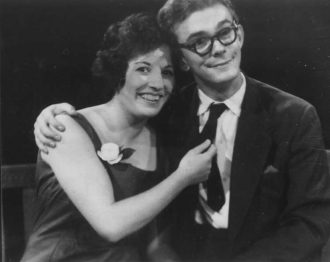 zoom
Alan Ayckbourn in his first play: The Square Cat

There are three interrelated archives that I work on: the Alan Ayckbourn official website, Alan Ayckbourn’s personal archive and The Bob Watson Archive.

Bob Watson was my predecessor and started the archive that has now become accessible to the public, he died in 2003. He set up the library and created the foundations of what would become the archive – voluntarily amassing a lot of information and rescuing much which was destroyed by a press officer in the 1980s, getting rid of boxes of archive material to clear space in his office! The Bob Watson Archive hold 54 years of Stephen Joseph Theatre history including press cuttings, reviews, programmes, posters, and scripts; some of which have never published or have only been performed here. We have about 400 scripts, including a complete set of Alan’s scripts and around 200 other plays we commissioned, it’s an invaluable collection.

We moved to our present home in 1996, a conversion of Scarborough’s Odeon and for the first time had a proper home for the collection. It’s a room bursting at the seams now. There are all the plays going back to 1955 – of course, our collection suffers from a loss of 60s and 70s memorabilia because of the press officer who dumped the boxes – but we do have a very comprehensive collection. Over the years, we’ve contacted actors, agents, and put out general appeals. On one occasion, someone rang a friend of the theatre’s about some memorabilia in his loft – there were 100s of play scripts dating back to the ’50s and ’60s, some of which were Ayckbourn’s “lost works”, so manuscripts and memorabilia can come from everywhere. We’ve nearly cracked it, only 20 scripts left to find. In regards to Alan’s works there was quite a notable absence of his early plays, and after a concerted effort, managed to find them all during the past couple of years with the help of the British Library, even the early ones that have never been published. We hold a complete set of Alan’s plays in Scarborough now and people can come and see them here. We offer a unique open access service as you can call and ask to look at the early plays in the archive and we’ll arrange it.

It’s a great research tool and all of Alan’s collection is digitised: all reviews, press cuttings, photographs etc from The Bob Watson Archive and this links to Alan’s own website. People can get in touch with me to get reviews, scripts, press cuttings and so on from the archive. We get requests from researchers, students, other theatres around the world – it’s a local collection that has a global impact!

We rarely do exhibitions here; we did one in 2005 to mark the theatre’s 50th anniversary and a photographic display marking Alan’s 70th birthday has just finished. We do supply archival material to other theatres though and with this year being Alan’s 70th birthday celebration, the 50th anniversary of his first play and his step down as Artistic Director of the Stephen Joseph Theatre, I think the archive will be in demand from other theatres and the media. We’re already looking at an exhibition with the Royal and Derngate Theatre in Northampton for their big Ayckbourn retrospective for which Alan will also be involved; this is a rarity and so quite a coup for the theatre