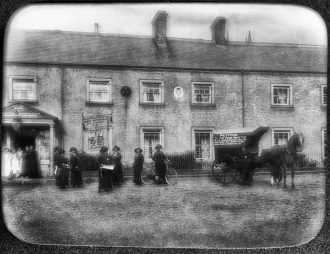 zoom
The women marchers outside the Blue Bell Hotel in Belford.
My location
Get Directions

A Women’s March from Edinburgh to London in support of Votes for Women took place in 1912. Seven women covered the entire route on foot, led initially by women on horseback and were joined for shorter stretches by supporters along the route. They followed the Great North Road, passing through Berwick, Belford and Alnwick.

The funniest incident narrated occurred at BELFORD , where the ladies appealed to two men working in a field for their signatures to the  petition. They declined, and gave their reason, “We don’t like your methods.” Pressed further they said it was window smashing and similar tactics that they objected to. When the suffragettes disclaimed militant methods, and pointed out that in an earlier time men had done much worse things than break windows in order to obtain civil rights, the unlooked for happened. The two men turned tail and fled!  Feminine logic was possibly too much for them. Miss Byham referred to the deplorable white slave traffic and to the urgent need for legislation. The ladies had a very attentive hearing.  (reported by the Morpeth Herald 25 Oct 1912)

From the archive of Belford and District Hidden History