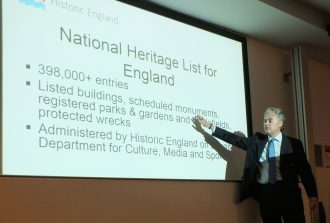 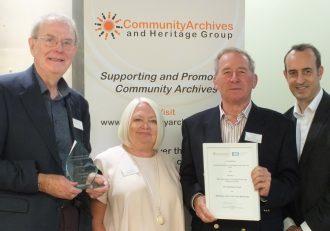 zoom
Gail Chester and Zaimal Azad from The Feminist Library

This year CAHG celebrates 10 years and appropriately the conference had the theme of sustainability.

Our speakers discussed various means of sustaining community archives when faced with increasingly limited financial support. We heard stories of creative partnerships; community activism; crowd-sourcing support; and building networks of community archive groups. There was a great deal of perseverance, passion and creativity expressed by groups who sought to tell the stories of their communities. From comic books to theatre productions to image libraries; all the speakers showed a great deal of ingenuity in finding ways to ‘dig where they stand’ and share their work on websites, in publications and exhibitions.

Dr Roger Bowdler is an experienced heritage-professional, having joined what is now Historic England, (originally English Heritage) in the 1980s. Dr Bowdler discussed the concept of heritage as peoples’ property. He examined how such heritage is often subject to attrition, and asserted the need to maintain connections between people and place – describing listed sites as ‘human objects’. His work on the National Heritage List for England gave witness to the value of both continuity and change and his presentation ended with a focus on a new community-orientated project, List England. This was launched last month. Dr Bowdler’s call to get ‘stuck in’ and pass our love of heritage to a new generation was an inspiring opening to a conference examining sustainability.

Roger Kitchen described his work with the Living Archive discussing various creative projects such as ‘The People’s History of Milton Keynes’ and the oral history project, ‘Life Lines’. The message was one of maintaining the organisation despite financial restrictions. His presentation showed us how it is possible to manage budgets very closely; looking for ways of raising funds to support their archive such as fundraising concerts and producing books and CDs.

The overall winner at this year’s conference is the Dartmoor Trust. Their project focused on WWI; a common theme during the centenary commemorations of 2016. The key ideas at the heart of the Dartmoor Trust’s project were: a need to look at those left behind; a focus on rural life; and a desire to create a visually-engaging exhibition, which could be utilised in a variety of settings. With the support of Heritage Lottery Funding, the small team were able to meet, and go beyond, their initial aims. The project revealed stories that have since filled gaps in local knowledge, and enabled the production of a lasting legacy in the form of a website. As the project leaders emphasised throughout their talk, the Dartmoor Trust successfully preserved a part of our past which caused upheaval, but also brought communities together.

Magic Torch create comics to tell history and folklore. The comic book genre has provided them with a portable model for engaging reluctant readers and telling community stories. Their presentation centred on their most recent project, “Achi Baba” which tells the story of Gallipoli 1915. It utilised letters home, poems and war diaries. Due to the conflicting ideas of a comic book against the backdrop of the emotive WW1, Magic Torch expressed how funding proved difficult. There have been sensitivities too around the need to commemorate Gallipoli and not “celebrate” it. Certainly their talk provided food for thought. Congratulations well deserved for such an innovative medium for education, and way of interpreting archives.

Leyland Historical Society’s project focused on collecting and documenting the industrial workforce in Leyland from the early 20th century onwards. Their website is filled with innovative presentations of material and research, such as virtual walks around Leyland. Also a project that provides information on every name that appears on the Leyland war memorial.

Best New Group Winner: The After Alice Project
This project is named after Alice Longstaff who, as a 14 year old schoolgirl, became an apprentice in a photographic studio in Hebden Bridge, Yorkshire. Over the next 70 years, Alice took photographs which documented everyday life in the area. The After Alice group are now picking up from where she left off, capturing photographic images on film and cataloguing using Dublin Core standards. They use volunteers in the community to help digitise and document Hebden Bridge from 2015 until 2115. So far they have built a collection of over 9,000 images supported by detailed metadata in their first year alone. The After Alice Project is the well-deserved winner of CAHG’s best new group award.

Gail Chester and Zaimal Azad from The Feminist Library

The Feminist Library discussed sustainability in the face of continued lack of support from their local authority. They were served with an eviction notice two days before Christmas in 2015, and have been using community activism to fight the decision, achieving an extension to their tenancy. Their enduring message is ‘preserving our history is preserving our future’.

iCAM discussed how forming partnerships and networks of connected groups was a good means to ensure a greater sustainability for all involved. As a central co-ordinating organisation, they are able to offer training, support and advice to their 18 member groups. They are connecting their websites and also with each other to pool skills and ideas. They use the word “Meitheal” meaning co-operative labour system as the symbol for their cohesive message. This system too is proving an excellent way to alleviate financial barriers, which so often are the demise of wonderful community archive projects which are constantly stretched for resources.

For many, the National Library of Scotland (NLS) provides a valuable resource through their vast online-collection of digitised maps. In their short presentation, Jack Latimer (CAHG) and Chris Fleet (NLS) discussed the value of geo-referencing. NLS have recently enabled this powerful tool to progress further, by enabling their scanned Ordnance Survey records to be layered over contemporary maps. Those already using geo-referenced maps simply need to embed the correct coding and attribute the source to NLS. Subsequently multiple layers of historical information can be explored by their website users. Excited discussion followed the talk, which revealed how sharing resources encourages wider engagement and supports sustainability.

After a satisfactory AGM, and diverse array of speakers, the 2016 CAHG conference came to a close with words from Vic Gray. He reiterated how proud he was to have been a part of CAHG at the beginning; how 10 years down the line it was great to see how healthy the group has become, giving mutual support; recognising the travails and challenges of sustainability that have been overcome in a nationally vulnerable time. And he finished off by saying how much we had re-ignited his enthusiasm for the group and its successful future.

So once again replete from their gargantuan lunchtime feast, the delegates and speakers can reflect and celebrate 10 good years of the CAHG and many more to come.